The block party is a great American institution. Who knew how fun it was to set yourself up in the middle of the street and drink beer? Most people aren't daring enough to try it when the roads are open to traffic though...chickens.

Anyhow, my neighborhood (Ikegami) hosts an annual "matsuri" for the Buddhist priest Nichiren which tops any block party, anywhere. For 3 days, tens of thousands of people come to my neighborhood to celebrate the death of Nichren. I suppose it's really just a very big, 700 year long Irish funeral. Well, this year was a lot of fun. Below is a short clip of the parade that started at 5PM and ended around 12AM. The one saving grace for the marchers was that they were not wearing MRD uniforms. 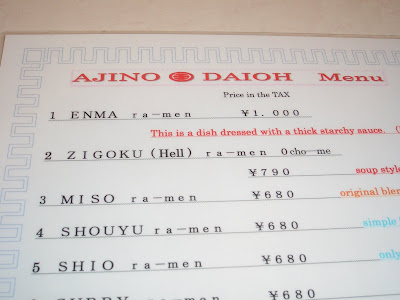 For those of you who are afraid of the Devil, please read no further. The rumors that the Devil went down to Georgia (the boiled peanuts one, not the Black Sea one), have been greatly exaggerated. In fact, he has found a home on the island of Hokkaido.

Now, the irony is that Hokkaido is the coldest part of Japan. In the winter, it makes Winnipeg look like Palm Springs. When you see pictures of 20-foot-high snow drifts, you are likely looking at dear old Hokkaido. Why would Lucifer, Beelzebub, Satan, Alec Baldwin (or whatever name you know him as) choose Hokkaido? The answer is simple: Ramen.

In my college years, Ramen held a very important place in my life. Other than feeding the tapeworm, it allowed me to ingest massive amounts of MSG for only 12 cents a packet, one of the side affects of which is hair loss and weight gain. I am just starting to really feel it now.

In Japan, Ramen is not bought at the A & P. It is is a delicacy borrowed from China and consumed in restaurants. There are many varieties of Ramen: miso, soy, tonkatsu, vegetable, and of course zigoku (Hell). Recently, I had the pleasure of sampling this sinful dish. Zigoku Ramen is unusual in more ways than just nomenclature. You can order it to your specific pain threshold. Dante could never have envisioned the complexity of the recipe. The scale goes from Zero to incinerator, based on the number of spoonfuls of chili powder you can stomach. Usually, Japanese food is served without the input of the patron-you get what the chef says you're going to get, how and when he says so, much akin to dinner at the Glynn household. Good thing I like casserole. Anyhow, I ordered Ni-chome, which is 2 heaping tablespoons of chili powder added to the soup broth. It was good and indeed hot, although it did look like the "eyeball soup" from The Temple of Doom and there was no sign of the devil. In fact, he never showed up. Rather, his old friend Montezuma paid a brief visit a few hours later. I have to say that I'm glad it wasn't Alec Baldwin.

Pato
Posted by benthictones at 9:41 PM No comments:

Yes, after 9 months in Japan, I will be making return, albeit brief, to the US of A. What can I expect? So much has happened since I boarded Continental Flight 008 for Narita.

To be honest, I am a little frightened. What will I do when I am treated to American style customer service (and by that I mean Lack-of-customer service)? I have been trained to accept a scenario where you get great service, even in the greatest of all American exports- McDonalds. Really, the service is incredible here. What will I do the first time someone forgets to say "thank you" or "your welcome"? Count to 10 I suppose?

And transportation. You can set your watch by the train and bus schedules. When they're late, the stationmaster gives you a note ( mentioned that last year). Good thing I will be driving and not taking NJT bus 163/164 or 158...

Living in another country makes you appreciate things that you normally take for granted. For me it's my family. My brother's wedding will allow my family to be together for a few days. Now that IS something to be afraid of!

To my Mother, happy Mothers' Day. Thanks for everything.

Be well,
Pat
Posted by benthictones at 1:24 AM No comments:

Friday night at 7PM is a very special time in Tokyo. The countless numbers of kaishain (businessmen) and OL (office ladies) make their way out into the night earlier than during the rest of the week, their work clothes like uniforms in an army ready to conquer the nearest izakaya (pub). The rumors about the Japanese people working hard are not overtstated. 7PM is usually quitting time for the weak-there are a few pockets of "9-5" but mostly it is "8-exhaustion" here.

It's not often that I find myself taking a nap at 7PM on a Friday night. That time is usually reserved for going home from work or going to a gig but tonight I was fortunate enough to be at home at 7PM. I was also fortunate enough to have my wake up call be an earthquake.

Now, earthquakes occur quite frequently in Japan. They are as regular as someone on a prune diet to be exact. In fact, this was the 3rd earthquake in Tokyo since I arrived in August. I just happened to miss the other 2. Tonight's quake was a 4 out of 7. Not even a passing grade for Mother Nature, although I am rather happy that she did not perform well on this examination.

Anyhow, the real reason that I am blogging is that I can't get back to sleep and have a little time on my hands before I dine with my friends. Oh, and I wanted to let those folks know that everything is hunky-dorey on this side of the world. I hope that you are all well on your side of the world, too.

Be well,
Pat
Posted by benthictones at 3:08 AM 1 comment:

When the Unordinary Becomes Ordinary

O hisashiburi desu ("it's been a while"). After talking with my father the other day (thanks Pop for the inspiration-i.e. guilt trip), I realized that I had been neglecting my duty as a member of the Internet community-to fill up cyberspace with as much useless and uncorroborated information as possible. It's like being part of the wikipedia posting regarding wikipedia's wikipedia.

I've been thinking a a lot as to why I've been so loathe to post something and have come to the conclusion that this strange experience of mine has now become not-so-strange anymore. I duck on the train. I don't get lost. Even talking in broken English/Japanese, accompanied by a pantomime that only Mummenschanz could dream of, has become routine. My version of the "toilet paper face" guy works really well when at the dry cleaners. Actually, in some ways I've become the MacGuyver of words, albeit without the electrical tape and Swiss Army knife. To tell you the truth, I think I'm a robot. Or perhaps it's like when Superman goes to Bizarro World and meets Bizarro Superman. Me become Bizarro Pat. Forget about verb tenses, articles, and the like...

Well, here are a list of things that I should have posted about since my last entry:

1. Merry Christmas!
Okay, so this stretches the timeline of even the most Orthodox of churches but forgive my indulgence (and no 95 Theses either). It seems that Santa isn't prejudicial when doling out gifts. Apparently, you can be Buddhist and/or Shinto and still take part in the Christmas celebration. All off the gifts but none of the guilt! Also, it wouldn't be Christmas without "Christmas Cake" which is white or chocolate cake with cream icing and strawberries. As with most Japanese versions of western traditions (i.e. the heated toilet seat with laser targeted "shower"), Christmas Cake is a major improvement over it's predecessor, the Fruit Cake. No one will hide a Christmas Cake under a couch in order not to eat it.

2. Happy New Year!
This one is self explanatory although I do feel bad for the Old Year. It is left out every time.

Originally called Honkey Day, this holiday celebrates the contributions of white people, particularly really, really white people without rhythm. Like Ralph Reed...Well, maybe not. Actually (and truthfully), White Day is another Valentine's Day but was conceived by the Japanese National Confectionery Industry Association in 1978. Fair enough to assume that it wouldn't be the Japanese Diabetic Association. Ahh, the power of special interest groups.

In Japan, Valentine's Day is the day when women give chocolate to men. White Day was created to increase chocolate sales in Japan...oh, I mean it was created to let men reciprocate the great act of giving the gift of chocolate.

4. Happy Easter
The death and resurrection of Christ has not caught on over here. Not even the Easter Egg hunt or Peter Rabbit. I'll give it a few more years to catch on. In the meanwhile, I will have to import Peeps and Paas egg dye. There's plenty of fake grass over here already.

In the event that I am unable to conjure up the mental fortitude to send out another post, I'd like to wish you all a Happy Memorial Day, Independence Day, Columbus Day, Thanksgiving, Christmas, New Years, Flag Day, Groundhog Day, etc. for the next 10 years or so. That should do it, right?

Be well,
Pat
Posted by benthictones at 6:56 AM 1 comment: